Visitors entering the park "Großer Garten" (English: "Great Garden") are often amazed as unrecognisable sounds and the energetic signal of a locomotive disturbs the idyllic peace and thick clouds of smoke rise up into the crowns of the trees. The solution to this puzzle is the park railway, a miniature railway with 381 mm gauge which takes thousands of small and large passengers on a trip through the park during the summer months. Special about this railway is that it is operated by children and young people in their free time.

There is only a reduced train operation scheme of the park railway, which also may be changed on short notice. Please consult the web page of the train operator for detailed information:

Technical data about the railway:

The steam locomotives, called "Moritz" and "Lisa", which both date from 1925, continue to do good and reliable service, especially at weekends and on public holidays. There are also two battery-electric locomotives built in 1962 and 1982. The maximum speed is nominally 30 km/h (19 mph), but never more than 20 km/h (12 mph) in actual operation.

History of the Park Railway Dresden

The town council of Dresden decided to build a children´s railway in the year 1950. Two steam engines were repaired. The Line was 1.3 kilometres (0.8 miles) long. In 1951 the railway line was expanded to the stations Carolasee, Karcherallee and Palaisteich. Now, the round trip has a distance of 5.6 kilometers (3.5 miles) and takes 30 minutes. The railway was given the name "Pioniereisenbahn Dresden".

The railway got the new name "Dresdner Parkeisenbahn" in 1990. In 1993, the railway became the property of the state of Saxony and was entrusted to the care of "Schlössern und Gärten Dresden".

In 1999, the manufactory of Volkswagen (so called "Glaserne Manufaktur") was built, so the station "Strassburger Platz" had to be dismounted. The new station was established in 2000.

Today, about 220,000 passengers are carried every year by the railway. 200 children spend their free time by being on duty in the Great Garden.

The Park Railway as hobby

There are currently 200 girls and boys working on the Park Railway. The young people are prepared for thier duties in training coureses held during the winter and the newly learned theory can be tested in practice on a 70 square metre model railway layout. Following this training, the young Park Railway volunteers devote considerable spare time to thier work as station supervisors, conductors, signalmen or crossing gatekeepers, lending the railway its truly unique charm. 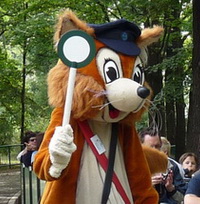 The Park Railway takes its passengers on a round trip in the park "Großer Garten". Many tram- and busstops are located around the park, for example:

The Park Railway Dresden is located in the park "Großer Garten", in the city centre of dresden.

Follow the signs for zoo and the factory "Gläserne Manufaktur" in the city center of Dresden, to get to the Great Garden.

The destination for your navigation device: